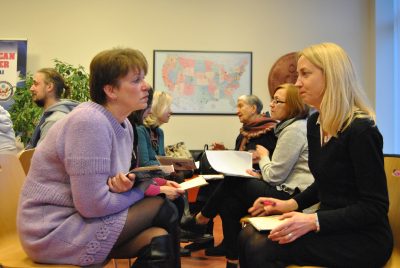 This February English Club had three meetings. The first two were for watching a movie “Joy” (2015). This movie depicted the story of a four-generation family, accompanied by loss and disappointments, but Joy, who grew up in this family, managed to take her destiny into her own hands and become a strong woman.

“Who are better drivers: women or men? Women must always be beautiful and take care of their appearance. Men are stronger than women.” These and other gender stereotypes were discussed by the members on the third meeting. They had to work in pairs, speak in English, respect their colleagues and learn new words.