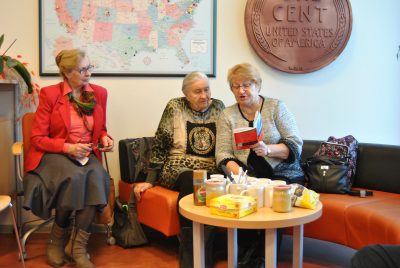 March started with finishing the movie “Silver Linings Playbook” (2012). At first it seemed to be a bit slow and not very involving, but the ending surprised everyone. This meeting was dedicated to listening skills practice. Also, a former member Liudvikas visited the English Club. Some years ago he was living in Šiauliai and actively participated in the meetings.

Furthermore, members have started reading a new book – “White Fang” by Jack London. After each chapter, they had to answer some text comprehension questions, and the member Algimantas was very amazed by the English language – the words are written in one way, but pronounced differently!

The final meeting of March was dedicated to cover one of the biggest US states – Illinois. The member of the club, Irena, presented some facts about it – population, size, the most famous places, museums, monuments, etc. And in order to deepen the knowledge, members also watched a short movie about this state. Moreover, to celebrate the World Theatre Day (celebrated on March 27), club members tested their acting skills! Using the mobile app, they played a game where they had to act out a situation which was described in English. That was a lot of fun!