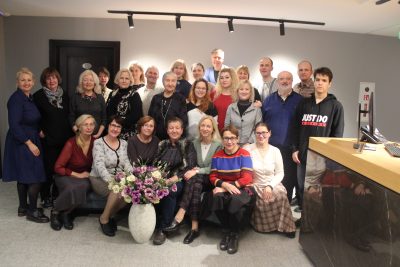 During the last month of autumn, the English club was full of adventures: we learned more about Tatarstan and Turkey, visited Mažeikiai and watched a movie.

Volunteers Emil from Russia and Mertz from Turkey gladly introduced their countries, traditions, famous people and architectural monuments of their countries to club’s members. Those, who are preparing to spend their winter holidays in warm Turkey were lucky enough as Mertz had plenty of recommendations of amazing places in Turkey which are not very tourist-crowded!

Probably the most anticipated meeting was a trip to Mažeikiai. Here we met our friends of Mažeikiai English Club. The meeting went really fast, and since we were guest there, it was obligatory for us to follow and respect local traditions and rules! We were forbidden to speak other languages but English since at least one word spoken in another language forced us to empty our wallets! Although we heard that guests had discounts…

The last meeting of the club was spent watching the movie “The Bucket List” (2007). It was a sensitive and thought-provoking movie with a subtle twist of humor, starring Jack Nicholson and Morgan Freeman as two terminally ill men on their road trip with a wish list of things to do before they “kick the bucket”. Full of sincerity, the film was a true ode to life and proof that the best time is here and now.