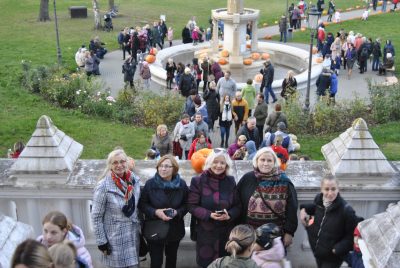 It is already the middle of autumn and the English Language Club continues its activities. This month, the club welcomed more guests from abroad. Two volunteers, Mert and Hilal, came to Šiauliai to volunteer from Turkey and their plan is to stay here almost all year. According to them, the hardest thing so far was to adjust to the Lithuanian weather.

Moreover, members also improved their English listening skills by watching the movie “Hidden Figures“ (2016). This is a biographical drama film that tells the inspirational story of three female African-American mathematicians — Katherine G. Johnson, Dorothy Vaughan and Mary Jackson — who were able to overcome adversity and play a critical role for their country with their contributions to the American space flight program.

Well, how about October without Halloween! This year, it was decided to celebrate it in an unconventional way and instead of a daily meeting at the American Corner, members went to Chaimas Frenkelis villa for a Halloween Pumpkin Festival. Over 700 decorated pumpkins were exhibited during the event!