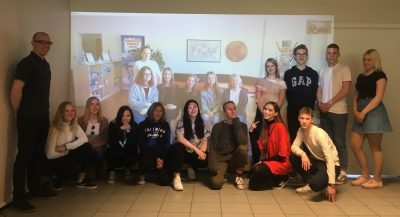 On May 9, the American Corner hosted a discussion about the bullying in schools during the event of the project “Skype Book Club”. Girls from Šiauliai Romuva progymnasium (teacher Žana Bareikienė) spoke with students from Estonia (Tallinn Kristiine gymnasium, teacher Denis Bozzi) on this crucial topic. Children read and analyzed an extract from the book “Speak” by American writer Laurie Halse Anderson. During the discussion, this really topic of bullying at schools was touched. Although children claimed that they do not feel much of bullying environment in their classrooms, this issue is still relevant at a school level.

Šiauliai County Povilas Višinskis Public Library collaborates with Tallinn Central Library in their project “Skype Book Club”. These are virtual conversations among students from different countries, aimed at getting acquainted with the works of foreign writers, encouraging critical thinking and interpretation of the text, tolerant acceptance of others’ opinions, views and differences, expressing thoughts, discussing and, of course, developing a foreign language.