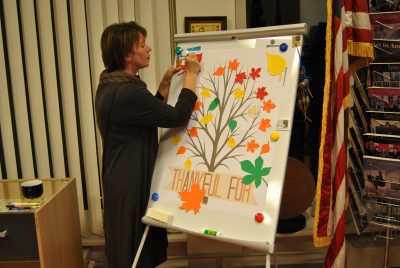 In November, the English Club had even 4 meeting. During the first two, the movie “The Life of Pi” (2012) in the original language was shown. Impressive cinematic effects and a beautiful storyline have not left indifferent. After the film, the participants discussed it in groups and made a joint decision – it is a piece of work that can be interpreted in its own way, and if you watch it several times – to discover and learn something new. Also, a guest from Japan Rina Nagai visited the club. She used to be an active member during her study time in Šiauliai.

And how is the November month without Thanksgiving! This American celebration also came to the English Club. Club member Aldona briefly presented this celebration, while Angelina, Marytė, Rasa and the founder of the club Roma prepared the traditional Thanksgiving Day’s meals! The members of the club had an opportunity to taste a pumpkin pie, cranberry sauce, fried potatoes, green bean casserole and even a stuffed turkey! The men of the club had a lot of compliments for ladies.

Well, the last meeting of November was about various festivals. Angelina, who is an active festival visitor, shared her experiences and showed many pictures. Guest Maxim from Ukraine introduced the traditional festival – “Malanka”. The active members of the club have been rewarded with symbolic American corner gifts for their efforts.